The Top 10 Best Places to Eat in Berlin Right Now

Let me fill you in on my recent trip to Berlin and share with you some of the best places to eat. When you think of Berlin you don’t think of great food but it has it by the ton. Berlin is a great city to visit with lots of rich culture and history to explore.

One of the best things about Berlin is that it is a very affordable place to live and eat. Berlin is a haven for international cuisines that are very affordable, from raw zucchini noodles to the best kebab in you’ll ever taste. You can find wonderful meals for under £10.

One local told me that it is cheaper to eat out than going to a supermarket! Here is a list of my favorite picks that you will enjoy.

Best Places to Eat in Berlin:

This one is a bit expensive but not too expensive, but much better than the others. Kumpel & Keule is a Berlin butcher with a ground-breaking focus on quality and transparency. Located in the Markthalle Neun in Kreuzberg, this is not only a great place to buy meat but also a prime spot for a grilled sausage, burger or steak.

Berlin food stories say that Berlin is a meat wonderland with an artisanal butcher around every corner, supplying neighbors with massive sausages and pork. Unfortunately, Small-scale meat production and private butchers have been pushed out of the market by industrial-scale meat production over the last decades and Berliners usually buy their meat at supermarkets.

The owners consist of a young duo. One, German, is one of the youngest butchers in Berlin Jörg Forstera, and the other is a food blogger and activist, Hendrik Haase. The cuisine is amazing and you need to try the DRY AGED CLASSIC Burger that is Dry Aged Beef, Ox Herb Tomato, Corn Salad and Sironi Bun for 11 euros. As well as this you should try the Onglet with Carrot/celery/carrot salt for 24 euros, and if you just share lots of things it is cheaper. Also worth trying is their lamb. They are both shown in the pic. It was the best restaurant I went to in Berlin.

It is a Doner Kebab restaurant. Berlin’s doner is the number one fast food in the city. A must try for every visitor. You would think that the doner Kebab was invented in Turkey, yet it is so popular In Berlin it may as well have been invented here! In fact, it was! True fact!!

The Turkish immigrated to Berlin in great numbers. One of them, Kadir Nurman, set up a stall in West Berlin in 1972, selling grilled meat and salad in a wrap. He saw the fast pace of the city life and thought that Berliners might like meat they could carry away with them, and eat on the go, and out of this came the Doner Kebab.

Imran is the best place to have the best Kebab in Berlin. Located in Neukölln right off Hermannplatz. This place has a reputation for exceptional meat quality among the Turkish population in Berlin. I found about it from our British tour guide and one thing you know about British people are that after a night out they all love getting a Doner Kebab. 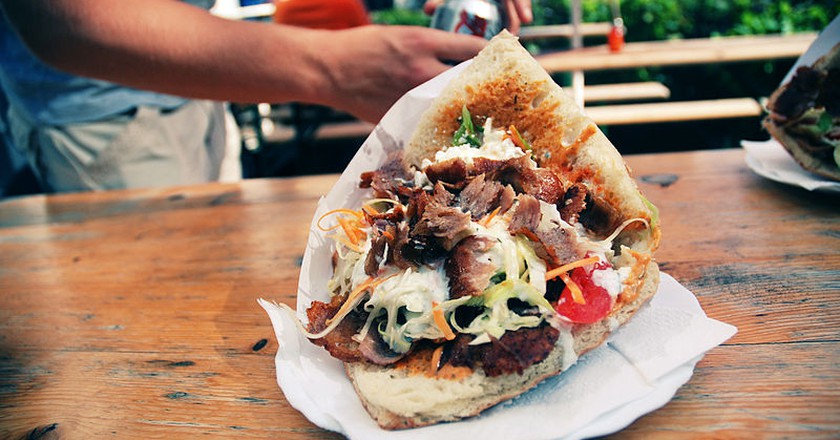 The Best Doner in Berlin comes with iceberg salad, onions, and tomatoes, bread and meat. The hot sauce is spicy as hell. It was not like any I have eaten in the UK, as it is not greasy. And for like 6 euros you get a very generous helping.

This is a restaurant in Kreuzberg. It is a Middle Eastern/ Sudanese restaurants that serve meat and vegan options. The food is very flavourful and cheap.

I had the chicken that came with lots of salad and a tasty peanut sauce they cover all their food in. They gave us lots of pita bread to mop up the sauce. We also had a vegetarian one with falafel and the best hummus in Berlin. All very lovely for just 6 Euros. You can see the Image of the food below. There is other vegan restaurants tim try, find out best vegan restaurants in Berlin.

Konnopke’s Imbiss is the best German street food stand for Currywurst in Berlin. It is located in Prenzlauer Berg right outside the transition under the bridge. Our tour guide said it was the best Currywurst in Berlin and there was a very long queue as he showed us it. They have two types: meat and vegan.

The Currywurst is a fast food dish of German Origin. It’s made of steamed then fried pork Sausage that is cut into bite-sized chunks, then seasoned with curry ketchup and a sauce based on spiced ketchup. Some top it off with curry powder.

CN traveler Says that it has been under the U-Berlin tracks in Prenzlauer Berg since 1930, and makes the most famous currywurst and bratwurst in Berlin.

I love walking around sometimes without actually having an end destination. You always find little gems, like this restaurant I stumbled upon. The Panda Noodle is one of the best Raman restaurants in Berlin and we didn’t know it was. It just looked cool and vibrant inside, so we went in!

The Panda Noodle serves up wonderful Raman in the heart of Kreutzer. Inside the restaurant has lots of neon lights and colorful décor as you can see in the photo below. It is a Fusion Joint that serves Chinese’s, Korean, Japanese, Thai and Vietnamese. They are all served with homemade noodles.

The Great thing about the restaurant is that you can customize your Raman all for under 10 euros and they give you a lot. It packs lots of flavors and a powerful taste. The staff at the place are very friendly and welcoming. This is a must try the restaurant for any Asian food lover seeking good Asian cuisine Berlin.

Zola is one of the best places to have the best pizza in Berlin. Berlin food stories have ranked it number 2 on their best pizza restaurants in Berlin. The pizza is baked no longer than two minutes in a blazing 485 degrees Celsius.

I had the delight of trying the salami one and it cost 9 euros and was very delicious. The pizza there is thin crusted and crispy and there is a wide variety of toppings to try.

The one downside is that we waited for about 30 minutes until we got a table but that could be due to the place being so popular. So before you go you need to make a reservation.

Some say this famous place makes the best burger in Berlin. Burgermeister Is a patty and bun joint aka Burger joint. It is situated in a former historical old public toilet, located in a former subway beneath Schlesisches Tor in Kreuzberg. You know they are going to serve good burgers by just seeing the long queues of people waiting to get in!

The burgers consist of beef and all the usual fixings, it starts at just 3.50 euros of the six varieties they offer. You can get a lovely delicious burger and fries for under 5 euros. They also have a vegetarian option that is made of tofu.

The most popular burger they serve is called the Meistabuger that comes with onions. Mustard, bacon and BBQ sauce that sounds very tasty. People say the burgers are very juicy. I think that a very juicy burger has more flavor than one that is not, comment down below if you agree or not. This is one best places to eat in Berlin.

Harina in Love is an Argentina street food stall located in Bernauer Str at Mauerpark. I found this place while I was walking around Sunday Fleamarket at Mauerpark. Find out more on my weekend in Berlin Itinerary post.

The sandwich I had was called the Beef sandwich classic that contained Argentina steak which is renowned for it’s high-quality, and it was juicy, big and cheap. It also comes with various sauces and pickles salad for 8 euros.

They say they use fresh ingredients to combine the classic popular Argentinian cuisines with new creative ideas to give you a great taste.

Schnitzelei is a restaurant located in Chausseestraße and Mitte. It services the famous Schnitzel. One of the best schnitzels in Berlin. It has a lovely outdoor seating great for the summer at the Chausseestraße location looking over at Spree River. They have an extensive range of different types of Schnitzel on the menu for the classic Wiener Schnitzel. They serve ones with turkey, cheese and even oysters

Schnitzel is invented in Austria but the Germans love it so much that it now in Germany it is counted as a traditional dish they have. A schnitzel is a meat that is usually thinned by pounding with a meat tenderizer, that is fried in some kind of oil or fat flour, beaten eggs and bread crumbs, and then fried, but some variants such as Walliser Schnitzel are not breaded.

Schnitzelei is a very popular place, so you will need to book in advance to ensure a seat when you arrive. You can get a Schnitzel for just 9.50 euros. I have tried the Vienna schnitzel, also called the Wiener schnitzel and it is made with veal. When I had it, it tasted like a big version of a Macdonald’s chicken nugget and was still very nice.

Consecutive food posts ftw! This was last night’s dinner in Berlin that needed reservations but thank you Ate @kakagonzales who includes food must-eats in her itinerary! 😂 Food tour!! 😄 This one’s Berlin’s Schnitzelei where they also have a vegetarian option ~ cordon bleu with potatoes and arugula salad! ♥️ NOMMERS #europanagon #anagonvacation

This is one of the best Vietnamese restaurants in Berlin. The culture trip says that there is a large Vietnamese population in Germany but not as big as Turkish. This restaurant is very tasty and comes with an added bonus of being cheap. Hamy Cafe focuses on Vietnamese fast food and pho. (I have been to Vietnam and you can find my 3 weeks Vietnam Itinerary on my blog).

Hamy Café is located in the trendy Kreuzkölln area across from the popular Volkspark Hasenheide. They offer daily curry specials. They use fresh ingredients. The Lonely Planet says the even during busy times you can be in and out in half an hour or less. They also offer a small choice of rice, noodles, salad, and Pho/soup dishes just for 5 euros.

cheap eats; had my first berlin meal here, im back now and i will be back again and again. 🍴🍜❤️

What was your best cheap place you have eaten in Berlin or if not been what one on the list would you like to try?

If you are considering going to Berlin than read my Best Itinerary for a Weekend in Berlin article.

10 Most Mesmerizing Castles in the World

12 best things to do in Southampton

A Croatian adventure through the Eyes of a Sports Fan

15 Things to do in Ho Chi Minh City

The Best 2 Weeks Vietnam Itinerary You Need To Have